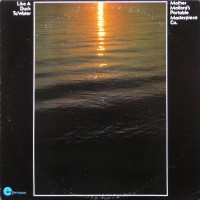 "This is the second release from David Borden's incredible synthesizer ensemble, recognized as the world's first. This album features more of Steve Drews' work than Borden's, but I seem to like it even more than the debut. This is the 2001 reissue with bonus tracks and I have to admit it's not the best rip. There are a few blips and wiggles (during Waterwheel in particular), but the music is too brilliant to really care. Uber minimal, gorgeous tonal waves rippling through your head. This is everything I love about synths, so dig in and tune out hazy Jane's." - DD