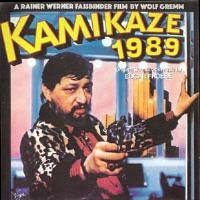 "I believe I first heard some of the music on this soundtrack as a result of watching the film Devil Fetus, which if I remember correctly steals several tracks (Intuition specifically) from this album (among others). In trying to track down that soundtrack I eventually learned of this, and was very pleased I did. A fantastic and underrated synth score from the Fassbinder thriller. I love how eclectic this is, from meandering tranquility to more kraut-y, beat driven stuff, it has a lot to offer. I've been binging on it for the past few months and hopefully you will as well! Chewww." - DD

I've just discovered your blog today - wow - so many great posts! Downloading a handful right now, can't wait to dig in with the ears. Thank you for all your efforts! Cheers from Qualicum Beach

Excellent, I'm happy you've found things of interest. Thanks for the comment!

i reallt DON'T KNOW hopw to THANBK YOU for this megarare OST !

Being a MAssive R :W Fassbinder fan, i cannot thank you ENOUGH !

And the movie is glorious too !