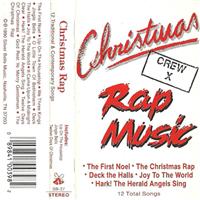 "Clippity clap, tippity tap!! As far as hip hop goes this "shit" is "whack". Fa la la la la la la la la laaaa!! Ya hear?! If there seems to be too many la's in there it's because there is. Rap?! But fear not fuglies. As redonk as this "entirely recorded on a casio w/ Christmas demo's" tape be, there is a saving grace in the closing moments that has officially made its way onto my "fav x-mas songs of all time" list. That's right, it's The Christmas Rap! Dig in foolies 'n coolies!" - DD