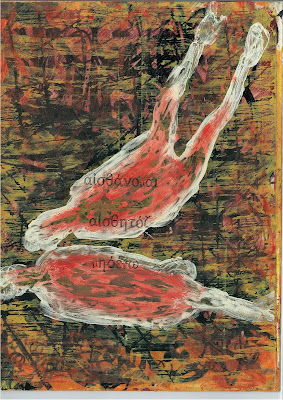 This (pdf) is the 2nd edition of Les Kapital Industrea, a fantastic little zine put together by a great Halifax artist, and good friend of mine, Matthew Duffy. He's a visual artist and musician, and is becoming somewhat of a cult icon around town due to some unfortunate incidents resulting in some rather absurd internet banter and general hatred among members of the community. He gets into trouble and keeps things interesting with his spastic though heartfelt creations. Some of his projects include царь of (NEO) & Jiba-Zapz, as well as playing cacophone & clarinet (not to mention dancing) for the psych-punk band The Ether, all of which based out of Halifax. This is a great zine, put together with contributions from a ton of fantastic artists and writers, most of which from Halifax and Montreal.

Check it out, it's free art!

Also, check out this interview with Matthew Duffy done by another friend of mine now in Montreal, Zachary Fairbrother of Omon Ra. They discuss the origins and intentions of the zine, as well as various other things. Zach's blog, Avant-Lard, is great too so check out the rest of it while yr there.