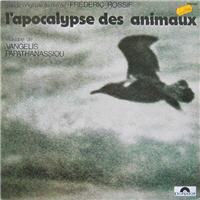 "As with Kamikaze 1989 I initially discovered the music on this from the movie Devil Fetus. When I heard the album in full I was mesmerized from beginning to end; Le Singe Bleu promptly became one of my favourite songs and I've since gone on to buy the LP for several people as it pops up often in Montreal shops. Highly recommended, dreamy, electronic minimalism from the guru himself, just at the dawn of his vast career." - DD