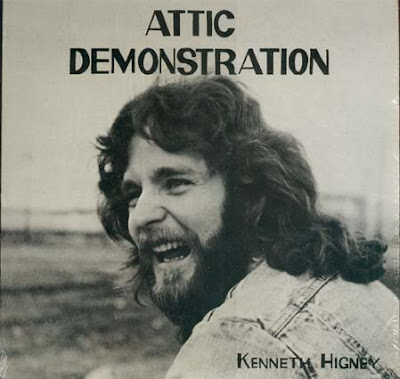 Imagine for a second that Jandek and Simon Finn teamed up with Jad Fair and started a psychedelic free form folky rock 'n' roll band in 1976. It might sound a little bit like this. It's naive but complex, confusing and strange but very beautiful and honest. It has a certain quality to it that I can't quite place, but I like it! Very much! I guess this album has become somewhat of a cult classic among record collectors, and it's pretty easy to see why. It's a very strange album, but I highly recommend it to those interested in outsider music.

"Attic Demonstration is a collection of demos performed by Higney in 1976. A New Jersey truck driver looking to jumpstart a career as a songwriter, Higney pressed the record in order to give it to other musicians, in hopes that they would perform his songs. That no one took him up on his offer is not surprising, since this a relentlessly downbeat, ramshackle collection of music. It’s a compelling and frequently bleak piece of work, but not one with much (or anything at all) in the way of the commercial potential Higney may have hoped for. Imagine Neil Young’s depressive masterwork On the Beach, only replace Neil Young with an untrained singer who vacillates between a haunted, plaintive drawl and a raspy shout, force the musicians to play constantly out of time, drench everything in tortured lead guitar, and deprive the band any second-takes." - Dusted Review

thats fantastic news, i'll have to grab one

I'm gearing up to do an official reissue of this on LP. Initially it was going to be on Feeding Tube Records, but now it's going to be on my new label One Kind Favor. Maybe you'd consider supporting my Kickstarter page:

me and several of my friends are extremely excited for this reissue! it's gonna be great! thank you!