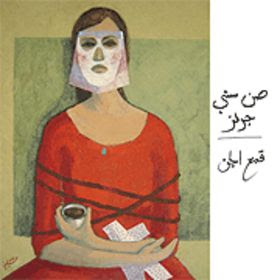 Sun City Girls are one of those bands where you never know what to expect. They're probably the band you can always rely on being surprised by. Every album I've ever heard has been totally different from the last. They're jazz, they're rock and roll, they're lo-fi garage punk, they're acid freak-out tribal blues, they're indian wedding destruction, they're folk fodder farfiza funk. They're also really great! This album is my favorite of what I've heard. It's very aggressive and raw, sometimes sounding a lot like Old Time Relijun or something. Lot's of cool guitar licks, and brutal drum drones, and a few great vocal waves that just put you in a trance! The guitar just squeals on into waves of euphoria until you forget that you're even listening to it. My favorite song is definitely the albums opener, Nites of Malta. It makes me want to cream on the walls with blood semen and smash my face into nails and screws. Enjoy this gem, or die a wasted soul.
(This is an LP rip, limited pressing of 570 copies)

"There's five tracks on "Djinn Funnel", recorded between 1999 and 2001, and they're the Girls like I've never been familiar with em before. I don't profess to know nearly the amount of SCG material as I'm sure many out there do but this one stumped me hard, if we were Invisible Jukeboxing I'd have been as out of my element as Marianne Faithful trying to nail down an MF Doom b-side. All these five are Sun City Girls playing the blues, playing the heavy electric blooz psych rock blues that is. "Nites of Malta" opens the set with a funky, swishing drumline and stoned, radio-ed nasal voice drip, with an absolutely searing Rick Bishop solo what kinda brings to mind Michio Kurihara shredding things on the record he did with Boris...'cept with the Eastern hookah haze the Girls often tread in. It ends with an explosive, thrashing chorus of screaming feedback (and screaming voices) and somehow the LP keeps getting better from there. If "Djinn Funnel" is the band's "Paranoid" - heavy, stoned and blues-informed - then "Dukun Degeneration" is its "Planet Caravan" with the echo of Ozzy's vocals replaced with noise distortion from Rick's guitar as Alan's struggles to keep things above water with melting, gelatinous bass fuzz. But it's Rick again who steers the songs up to and over the brink with more destructive, almost metal moves on "Dark Nectar", while he shears up in almost Mizutani-like fashion with another Eastern bent on "Red Sea Blues", an even closer comparison would be Acid Mothers Temple and the Eastern-influenced psychedelics they dredge up from time to time. The best is saved for last on the 12-minute epic finale "Grand Trunk (Drifters of the Grand Trunk)". Moving at a meditative pace and operating off of a rhythm section composed of Gocher's cyclical cymbal shots and Alan's gently loping, looping bass rhythm, the Girls hit a sound not at all unlike what OM put together on "Conference of the Birds" with a bit more in the way of subtly pushed, acid-washed guitar licks and airy vocals. Other reference points coult be Quicksilver Messenger Service or the Grateful Dead. And yeah the Sun City Girls playing in line with classic 70's psych sounds every bit as good as you'd hope."
- OuterSpaceGamelan

I love the Sun City Girls, and you did a comparision with Old Time Relijun, so i'm very excited to hear this album :D
(excuse me for my english, i'm from Chile)