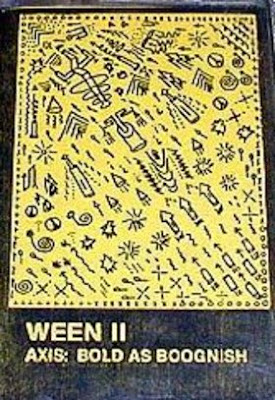 Depending on when Mrs. Slack came out, this would be Ween's second release. There's isn't much known about the album, and the label it was released on is long dead. The album is kinda strange, for Ween. It's very raunchy old school punk type music, with the trademark silly lyrics, and lots of noisy feedback. At times it's reminiscent of Dead Milkmen or something of that ilk, but overall it's a lot noisier. You can tell they were 17 when they made this. It's very aggressive and full of hyperactivity. I Love it! I had never heard Ween like this and it's great! Released on cassette tape.

(Thanks to Bruunski Beats for the original upload)
Posted by Dead Dog at 8:55 AM

been looking for this! thx much : 9