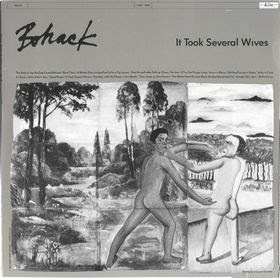 You either love Vincent Gallo, or you hate him with every fiber of your being. I find it hilarious that so many people put so much effort into hating him, but ahh well. I think his songs are really pretty and his films look nice, and I don't really care whether he's an arrogant asshole or not cuz I aint never met him. I digress.

Enter Bohack, the first record to feature one Vincent Vito Gallo. Shortly after its release the band split up and Gallo began his film career. I totally loved it! Super noisey, super eclectic, very hypnotic! It's nothing like Gallo's later recordings, so don't expect that soft Chet Baker voice to sooth you to sleep. This is way more explosive and aggressive. The albums cover art was done by the famous artist Francesco Clemente. It's divided into two tracks (side A & B), but the album is actually a bunch of tracks. Sorry about that. Also an LP rip, so enjoy it yous!

Get it now motherfuckers!

cheers mate, ive been looking for this album for ages!

can you repost the link?