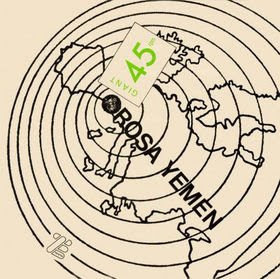 Released on ZE Records in 1978, this is Lizzy Mercier Descloux's first band. As far as I know this EP is the only Rosa Yemen release, before Descloux moved on to a solo career. This album is fantastic! So energetic and spastic! Comparable somewhat, if only aesthetically, to DNA, or Mars. I like this a lot more then her solo stuff, or what ive heard of it. It's much more aggressive. more info:

"Lizzy Mercier Descloux was a pioneering force in avant-garde rock and in the worldbeat genre, chalking up significant achievements in the latter field well before it existed. Tremendously precocious in an artistic sense, Mercier Descloux dropped out of art studies in order to co-manage a punk boutique and record store in Paris with future ZE Records executive Michel Esteban. In 1975 Mercier Descloux first visited New York City and fell right in with the no wave scene, becoming close friends with Richard Hell and Patti Smith, both of whom contributed material to her first book, Desiderata. Mercier Descloux recorded her first ZE Records release in 1978 as Rosa Yemen, a low-key no wave-styled effort that reflects the influence of the no wave band Mars. Little about Rosa Yemen indicated the genius that would soon carry Mercier Descloux through an unparalleled string of four innovative masterpieces to come."

This is Descloux's solo stuff, NOT Rosa Yemen.

Wow thank you so much i love her work

the pleasure is mine!

thanks! never knew this before...

From the quoted review: "Little about Rosa Yemen indicated the genius that would soon carry Mercier Descloux through an unparalleled string of four innovative masterpieces to come" - just shows why you should never trust a reviewer! The whole EP oozes more genius than most household names manage in a lifetime. Stunning even 30 years on, and for me too still her best, and one of the greatest things to come out of a dizzyingly creative time.

yeah ts ridiculous. ive since grown quite fond of her solo stuff, but this is still the best!

It is not my first time to visit this web site,
i am browsing this website dailly and obtain pleasant facts from here all the time.
My blog post : car insurance