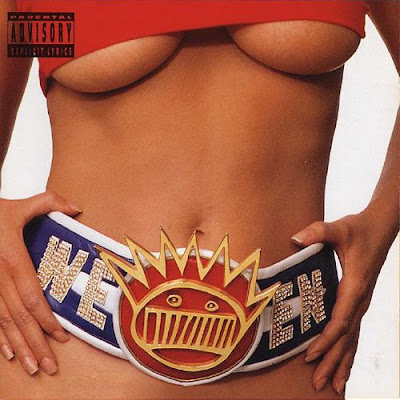 Well, it's Ween time. Gene & Dean Ween (Aaron Freeman and Mickey Melchiondo) are always great, and this is no exception. For some reason i've managed to, despite loving Ween for many years now, go until about a week ago without ever hearing this album. I remember hearing it was bad when it first came out, and at the time I was quite impressionable. Ween is one of those bands that I've always had a soft spot for. I was in grade 9 the first time I heard them, it was the video for Push Th' Little Daisies, and I was instantly impressed. Shortly after that I was given a tape by a friend. Side A: Eric's Trip (Peter/Love Tara), Side B: Ween (Pure Guava). I fell completely in love with Pure Guava and didn't stop listening to it for months. I've loved Ween ever since. Now, I have Chocolate & Cheese and I've spent about a week listening to it. It's incredible. Get it and listen to it a lot! Sometimes cheesy, sometimes hard, sometimes beautiful, always silly, always totally believable (somehow). It's 100% Ween, dig?

"Chocolate and Cheese was Ween's fourth studio album, originally released by Elektra Records in 1994. It was the first Ween album to eschew the four-track recordings of their first three albums and utilize a professional recording studio. However, most of the instruments were still played by Dean and Gene Ween, including their drum machine.

The album is dedicated to comedian John Candy, who died while Ween was putting the album together. "A Tear for Eddie" was dedicated to the funk/psychedelic guitar pioneer Eddie Hazel, who died December 23, 1992. Ween originally wanted the cover to have a "gay sailor theme" but the studio thought it politically incorrect (possibly because of the "HIV Song" which is ironically cheery and upbeat), so they opted for the woman's body on the cover."

The "official" music video for Freedom of '76