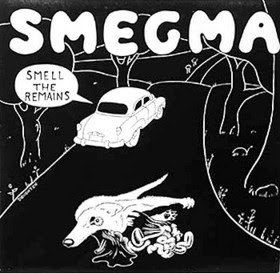 If you've never heard Smegma before, it's like if eggs were boiling on your brain as you watched a three stooges marathon in fastforward and drank sixteen gallons of grape kool-aid, spiked with a 60 of Gibsons Finest. Yes, it's that good. The only members of the LAFMS still around. Totally cool noise/rock from way bacck. This album is a little more recent, but not too. It's just as delicious as anything else, with a great mix of total noise chaos, free form screetch, garage rock, ambient moans, and tape collages. At times somewhat reminiscent of The Plastic People Of The Universe, or something of that ilk. I highly reccomend it to anyone interested in anything spastic. Enjoy it, or be foolish.

"Smegma is an American experimental noise group formed in Pasadena, California in 1973 and currently based in Portland, Oregon. Originally part of the Los Angeles Free Music Society (LAFMS) movement of the 1970s, Smegma is one of the few music collectives of that era still active today." - Wikipedia