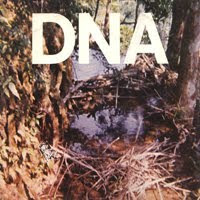 As per request, a re-up of this seminal debut
Part of the short lived New York no wave scene, DNA's music sounds like stiff contorted jerks and howls, spilling out randomly and with great intensity. I've seen Arto Lindsay being quoted as saying (and i'm paraphrasing) he "never wanted to have an actual chord played in any of [his] songs". Instead he simply plays rhythmic patterns by slapping, smashing, twisting, and pounding his guitar. Though not alike musically, I can't help but draw similarities between the voice of Arto Lindsay and Mark Mothersbaugh (Devo), Arto being much more chaotic and fierce. This album is fantastic, and far too short, so get it and listen to it three times!

this is great. thank you so much.