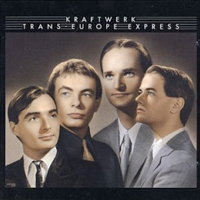 This is a band that took me a while to get into. I enjoyed a few songs here and there on comps people had given me, but for the most part went as far as to say I didn't like them for years. It wasn't until hearing Autobahn a few times, as well as developing a love affair with Neu!, that I realized just how much I actually did like Kraftwerk. Then I heard this, Trans-Europe Express, along with The Man-Machine, and I totally fell in love. More albums followed and I quickly realized that they were something far more significant than I had initially given credit for. If you're at all in the same boat then get this, my personal favourite of their albums. It's simple, patient, warm, and fluent. We are showroom dummies!