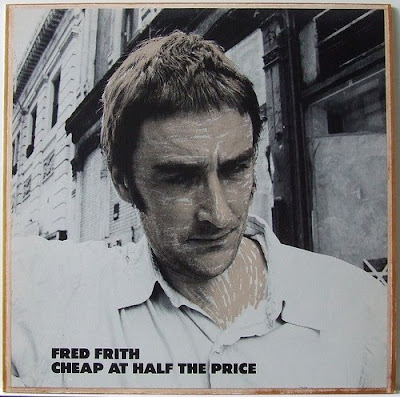 The first time I heard this album it totally threw me against a wall, as would any introduction to Fred Frith I should assume. It screamed at me, and I listened contently. If you've never heard this album, or especially if you've never heard Fred Frith, then you are in for a real treat. The first song that really grabbed me, and is still my favorite of his, is Evolution. When that middle-eastern-esque guitar solo kicks in it just fries my brain. I sat down about a month ago and started watching the film Step Across The Border (1990), which features Frith throughout, and I only made it ten minutes in before I paused it and spent the rest of the night listening to Frith albums I'd never heard before. It was a great night. So please grab this if you've never heard it. Frith is as eclectic as a river is wet, and this album is no exception, so to try and explain what he sounds like would do no justice. Just get it if you're interested in anything.

"Cheap at Half the Price is a 1983 solo album by English guitarist, composer and improvisor Fred Frith. It was Frith's third and last album for The Residents' Ralph Records label and was recorded by Frith at his home in New York City on a 4-track recorder. Frith played almost all the instruments himself, with the exception of bass guitar on two tracks, and drums, for which he used drum tapes and samples previously recorded by other drummers." - Wikipedia.com