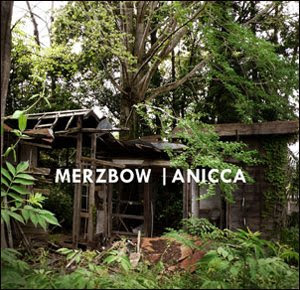 First things first I suppose. I've been reading mixed reviews on Anicca, as well as Merbow's input as of late in general. I'm not well versed in the world of Merzbow, though I plan on being so and have been slowly building my repertoire in the past weeks. Of what I've heard, which again is still not significant, I really enjoyed Anicca a great deal. It's one of the heaviest and loudest things I've ever heard, and that excites me greatly. It throttled me with every ounze of energy it could muster, which was a lot, and I was filled with candescent power. I would probably go as far as to say that it's my favorite so far. If you're a Merzbow guru then please be light on me if that statement appawls you. I'm growing, I assure you, and I will be listening to many more albums in the very near future. In the meantime though I highly recomend this album to anyone unfamiliar with Merzbow, and even to anyone who is versed but has not yet heard this. Maybe I'm wrong, but I could care less 'cause I really enjoyed it. Did I mention that already? Ahhh well. Get it fucks!

"To begin a review by claiming Masami Akita as "the undisputed king of Japanese noise" would be a cliché that has probably been used 200 times before, counting each time Masami Akita has come up with a new Merzbow-album from his laboratory of sonic extremity. On this latest album "Anicca" released on the excellent British Cold Spring-label, Merzbow presents three pieces of ear-shattering noise. Opening piece titled "Anicca Part 1" is a twenty minutes piece recorded in London just after the well-acclaimed noise event at the UlU club in April 2008 featuring Merzbow, Satori and Sutcliffe Jugend. The piece separates in its inclusion of improvised freestyle drum-work from Masami Akita. The use of drums adds an interesting rhythm structure in the abrasive work. The contrast between acoustic sounds and electronic noise gives a quite interesting result. The next two pieces has been derived from Munemi House in Tokyo demonstrating Merzbow's ability to control and manipulate harsh sound textures and thus create the effect of hypnotism. Especially the third and final part of Anicca is an enjoyable exploration with the use of sonar sounds as part of the noise texture. Yet another fine work of anti-music from the Japanese legend which 30 years after his first shot still seems to find new paths in his jungle of sonic madness." - Vital Weekly

Hey, this is a pretty good release, the spastic drums really add a lot. if you haven't heard hybrid noisebloom you should check it out. There is a nice break in one of the tracks that has a percussion sound that sounds like a metal object being thrown around.

awesome! sounds good to me, i was actually just about to grab that one. exp etc has just uploaded the entire merzbox and im slowly making my way through the list.