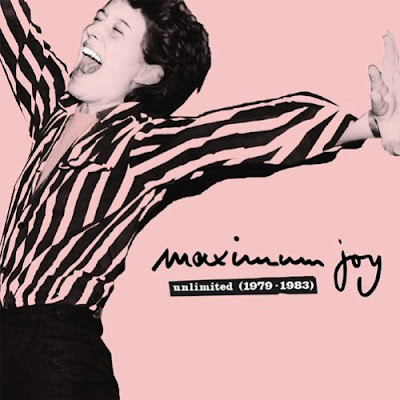 Picture Ana da Silva of The Raincoats yelping along to some superb punk-groove (think Dub era Flying Lizards), toss in some amazing Pop Group horns and that is somewhat what this album represents. Two parts Glaxo Babies, one part Pop Group, with Janine Rainforth on vocals, Maximum Joy is a hard hitting groove fest that you can't help but dance to! This is kind of like their version of Minor Threat's Discography, in that it compiles tracks from a larger body to give you the overall, a retrospect. I won't ramble on for too long, but if you want to bop, and rock out then grab this one!

"On the track "Building Bridges", Maximum Joy's Janine Rainforth sings, "How do you feel about building a bridge / Between you and me / Between them and us?" A great deal of Maximum Joy's output seems to deal with building bridges. Musically, the group's use of complex percussion, horns, danceable bass lines, and overtly English female vocals built a bridge between the worlds of Afrobeat, reggae, avant-garde jazz, funk, and pop. On a personal level, the band built a bridge connecting musical luminaries like the Pop Group, Adrian Sherwood, Dennis Bovell, Nellee Hooper, and John Peel. The group came together in Bristol, England, in 1979 and besides Rainforth, included Tony Wrafter, Charles Llewelyn, John Waddington, and Dan Catsis. Llewelyn was a former member of Glaxo Babies, Waddington was formerly in the Pop Group, and Catsis and Wrafter had played in both bands. Later, they would be joined by Kev Evans, future super-producer Nellee Hooper, and Jeremy Hirsh." - PopMatters Review