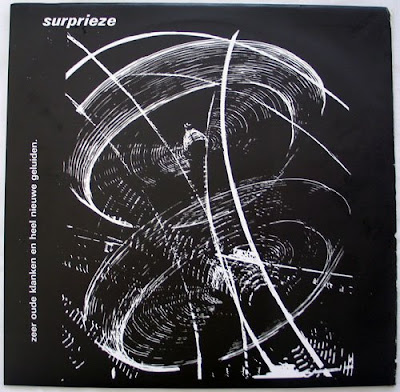 SWACK! SHOOMP! BLAP! Look the fuck out before your face explodes! This little dutch jem is golden! Full of disturbed psychedelic free jazz rock and roll extravaganza! There's raunchy guitars, noisy drums, fuzzy feedback, bagpipes, flutes, chants, horns, strings, harmony, cacophony, and plain old good time freak outs. It's got a somewhat middle eastern edge at times, and at times it's kinda like the velvet underground or something. It's all over the place and nasty and I like it that way! Many levels, and they're all schizophrenic noodles and really superb. To top it all off, this is an original vinyl rip courtesy of the great Mutant Sounds. So get it! Now!

"I first read the reviews of the Surprieze LP's and did not expect to hear what I heard when I finally had the chance to listen. The descriptions I read were possibly not written by reviewers who liked or knew albums like Kalacakra, Dom, Siloah, etc., German acoustic improvisational Krautrock albums with a raga-like effect...
This band who started with their career with R&B in 1966 evolved to something completely different, something more psychedelic through avantgardistic and more pure mood improvisation styles. "Suprieze" refers to "surprise" and the music is surprising indeed, because there is not much music like this being made in Holland.
The first track is like Kalacakra, improvisational raga like.
The second track start like an experimental sounds creation like very early Kraftwerk. This kind of creativity with music being born from within the mood and sound creation was very ahead of it's time, and even now it's still not always understood by music writers. -Thanks to the newer more accessible works of Kraftwerk some people did take time to get into the earlier works of Kraftwerk for instance, but other groups were often still denied, although such "sound creations" on its own have abilities to look for and dig into the 'essence' of musical creation. Such transformational potential, within a psychedelic / bluesy raga like mood continuation, creating its own structures, becomes an accessible and enjoyable, mind expanding experience.
After the first two long tracks in the described style two less appealing underground blues tracks come after that. The first track on side B, "Zero" is experimental acid blues, with a psychedelic repetitive rhythm, and with, let's call it "Native screams" and blues mouth harmonica.
The very short track "In Galop" to be followed are completely experimental free sounds. "Lazarus" is a long acid psychedelic improvisation, completely tripped out, with distorted electric guitars, bagpipes, echoed effects, psychedelic voice sounds / singing, flutes. "Lazarus" is a Dutch word for being completely farout which you can be by being drunk or stoned, but can become also when you would listen to this music. The title of the album itself means something like "old sounds for a new sound".
Except for the two blues tracks this is a very interesting psychedelic record, maybe even the most psychedelic record from Holland." - Dutch Progressive Music Reviews

TRACK LIST:
(Note: This track list is from Discog's, which is the only one I could find online, and is different then the upload itself. The sides are reversed. I'm not sure which is correct, sorry.)

(Thanks to Mutant Sounds for always being amazing, and for the original upload!!)
Posted by Dead Dog at 9:40 AM