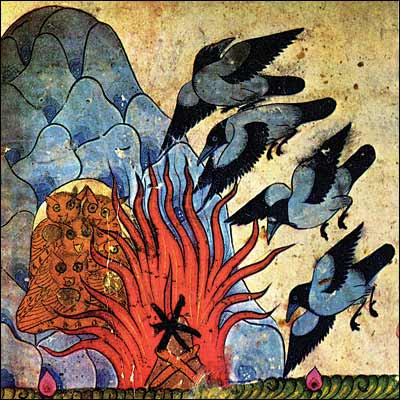 If this album doesn't move you, then you don't deserve to breath. As far as 2006 goes this one is way up there at the top, along with Beach House's debut. The first time I heard this it was about 7:30 in the morning, I was sitting on the couch drinking some coffee and my roommate put it on. About halfway through the song Unforgivable Question I realized I was completely entranced by the music. I quickly asked who I was listening to, and so began my love affinity with Jakob Olausson. The only other music I was able to find by the gifted Swede was his equally unknown band, Joshua Jugband 5. This is basement bedroom four-track bliss like you've never heard it. For the few of you who may know Tradition, this is somewhat comparable at times, if only for the occasional bellow from deep within Olausson's belly. Full of bells and whistles and trinkets, toy noise makers found in garbage dumps and flea markets, full of gorgeous guitar melodies, full of hauntingly morose vocal chants, full of absolute, undoubted, moving beauty. Get this album or you're wasting your life!

"If Skip Spence were somehow, instead of finding his white-frocked self stuck in the rat-infested hole that was Bellvue, transplanted to the pine forests north of Malmo, Sweden, in a sonic nest of gimbri, bells, shakers and clothed in Tibetan silk, one would come slightly closer to the reality of Jakob Olausson’s migratory whims. To be sure, that foggy and only slightly inland empire of synapse-twisters like Ben Chasny offers a step on the trodden trail, but this isn’t the same road we’ve traveled before. Olausson’s huge ears protect him from the cold and keep the sun from turning his face to a series of desert crags, as his compositions slowly fade down the walls of four-track bedroom artistry into atemporal suites that shrink huge expanses and are a bellows to the microcosmic. Enter the Moonlight Farm." - Clifford Allen (De Stijl)