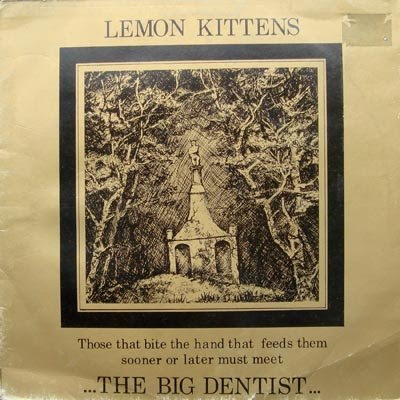 Those that bite the hand that feeds them sooner or later must meet ... THE BIG DENTIST ...! Indeed, there is no better statement to sum up this album. I've only just started listening to it, I stumbled upon it a few days ago while researching Karl Blake, and I immediately knew I had to share it on here. It's got so much of what I love in so many different bands. There is just so much to offer. It's like The Flying Lizards, with a bit of Eno (sometimes), and even briefly at times it takes on a certain tenderness which can't help but remind one of the great Robert Wyatt, of The Soft Machine. Take all of that and mix it with some sort of odd-ball early electronica/80's synth-pop and you might be close to this album. You may also be way off base. Who knows, and who cares. This album is so much stranger and eclectic then how i've explained it, so just get it because it's really interesting and fantastic stuff!

"The Lemon Kittens are a post-punk band formed in Reading, Berkshire, England in the late 1970s by Karl Blake and Gary Thatcher. The cast of the band revolved quite frequently, notably counting among its membership musicians such as Danielle Dax and Mark Perry of Alternative TV and The Good Missionaries." - Wikipedia.com


Not from this album, but it'll give you a taste.

there is something wrong with this post. It downloaded very slowly and then it was impossible to open the package. Could you post it in rapidshare or badono or megaupload?

hey, sorry about that. someone else mentioned this as well. my first time using mediafire, ill repost it sometime this weekend to rapidshare.

Thanks! I really appreciate that.

Anyway, I suppose that it will be great album. I know their previous one, so I expect a very good stuff!

there ya go friend, let me know if that works.

its a great album! i also recommend Karl Blake's solo stuff if you like this and havent heard it.

Thanks so much! I downloaded the record without any problems. And as I supposed - it`s a great stuff! Yes, I know Karl Blake and Danielle Dax later recordings, but Lemon Kittens is the best!
Keep up the good work!
Stan.

awesome, thanks for the comments!

Hey thanks for this. Just lost a bidding war for this on E-Bay but this has sweetened the disappointment as at least I can now hear it!

Karl Blake is a legend. Everything he has ever done has pushed the boundaries and been very original.

Love the Shock Headed Peters stuff and The Underneath stuff and Evil Genius is also ace.

yeah, i really dig the shock headed peters stuff. sorry to hear about yr loss, glad i could help.

I just couldnt leave your website before saying that I really enjoyed the quality information you offer to your visitors... Lawrenceville dentist

thank you very much!!!

An Awesome trip down memory lane. Thank you for posting this.