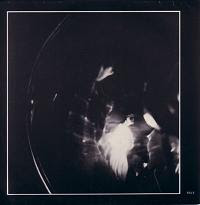 Felt were an influencial 80's rock band. While having a wide range of sounds in their repitoire, they often combined atmospheric washes with intricate guitar riffs and emotive, distinctly "80's" vocals. This is my favourite release of theirs. Despite being entirely too short, My Face Is On Fire represents the best of the bands sound. With pulsing drums rolling, twangy acoustic guitar licks, and a seemingly lo-fi recording aesthetic, it's fairly different from the bands later, more pop oriented albums. It's more dynamic and youthful, while still maintaining a dark ambience. Highly recommended for anyone interested in 80's brit-rock/goth type stuff (think Echo & The Bunnymen). 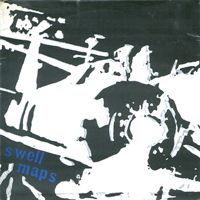 This unnerving beast is quite delicious indeed. It's the first release by England's experimental punkers Swell Maps to really get my goat. And boy did it get my goat. Mind you, I'm a fan of most of their stuff now, but this is still the one that gets the most play. A quick but significant beauty, it completely throttled me the first time around. Specifically the song Let's Build A Car. It's like Simply Saucer and The Buzzcocks kicking the shit out of Sonic Youth in a bar room blitz. I wish I had a vinyl rip 'cuz the piano is way down in this mix, and the piano is amazing. Too bad. After that the album drops the Cocks in favour of a more brooding attire, savage and punchy, finally closing with a brief but slow going groan. Dig it sweet babes, by the gallon! 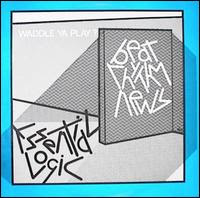 Essential Logic are a queer and somewhat misleading offshoot project courtesy of saxophonist Lora Logic (X-Ray Spex). With frantic grooves bouncing about, between rather tame head bobbers, Logic's Meredith Monk-style squeals and yelps, though ocassionally jarring, are refreshingly enthusiastic. This isn't your typical punk record, but it's impossible to deny a connection. With it's subtle aggression and abstract licks, Beat Rhythm News is reminiscent of a Gang Of Four/Bow Wow Wow crossed with early Swell Maps, and a pretencious dancy "art star" sort of thing, though I don't think the pretention maintains any momentum here. I'm not entirely sure that what I'm saying is valid or builds any interest at all, so perhaps you should grab it and figure it out for yourself. Fav song, Albert. 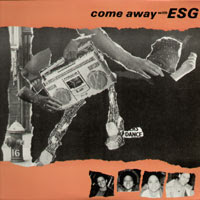 Come Away With ESG is one of those records that everyone should have a copy of. Regardless of your interest in dance music it will cause bones to wiggle and limbs to flail. Originally made up of three sisters and two friends, ESG were very influencial in the early New York hip-hop and post-punk world. With their primitive yet complex polyrhythms and thick walking bass lines, their fusion of disco dance and a punk rock ethos created a sound all their own. In my opinion they are pioneers of the "mutant disco" sound, though not normally associated with it, and this is one of the funnest records around. So dig on it sweet sweeties, there's gold in them there hills! 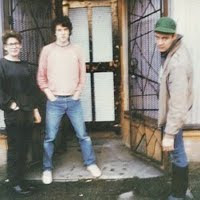 There is a list, oh yes... a list, and it is a list I frequently mention. It refers to great moments in rock n roll history and it contains the best of the best. If you look way up at the top of this list, amongst other such greats as Buddy Holly, The Jesus And Mary Chain, The Cramps, or The Velvets, to name a few, you'll see Beat Happening. Combining 50's Americana with an iconoclastic wit, their artless soul and lo-fi D.I.Y. brand of bubblegum and apple pie rock n roll is for gleamy eyed teenagers who just want to dance and have fun. It bears an unquantifiable honesty that I find people generally appreciate or scoff at. If you're the latter I feel sorry for you, you are missing out on some of the greatest music ever made. It's "evil spy hide n seek love songs for haunted house groove parties" rock n roll, so dig it long and hard sweeties! The Jesus And Mary Chain are quite simply one of the greatest things to happen in rock and roll music, period. It's a crying shame that more people don't shout from their rooftops an undying devotion and appreciation for something so remarkable. This, their epochal debut, is worth ten thousand kisses I assure you. If you're already a fan then you've probably heard the lead track, Upside Down, but you may be unfamiliar with the somewhat flippant and equally hostile sounds of Vegetable Man. Both tracks are incredible and a good indication of things to come on Psychocandy, their first album. So hop on it, rock and roll it, and burn your other records for being so ridiculous in comparison.

"My turquoise waistcoat is quite out of sight, but oh oh my haircut looks so bad..."
Posted by Dead Dog at 3:58 PM 2 comments: 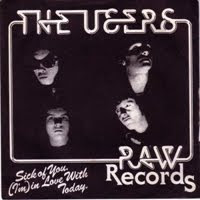 Here's some motor revin punk rock to rattle yr bones, from Cambridge no less. Sounding a lot like an MC5/Stooges/Dolls emporium of rock, The Users will throttle your sad pathetic day into fun times and unabashed recklessness. With such fantastically astute lines as "people always talk about the money saved away, I just wanna spend it I'm in love with today" you'll want to go and get yourself a jug 'o beer and spit on all the stupid people you know. Yes these are words to live by my friends, this is how punk rock is suppose to taste. So drink it down and enjoy. 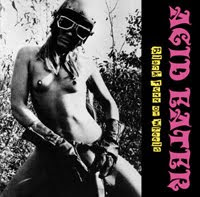 It's time to get the fuck on yr flame-engulfed moped and cruise down the block, taunting and antagonizing all in sight! It's pure chaos, fuzzed out, psychedelic, swamp walkin, ball blastin, shit meltin, rubber burnin, blood boilin, trash talkin rock and roll for the soul brothers and sisters! Never fear, Acid Eater is here! They come to destroy all that ails ya, shout it out loud! From the great Masonna comes Black Fuzz On Wheels (a name that says it all), the second release by this incredibly powerful rock and roll spasm of a band. Get it and groove on to the sun mother fuckers!

Dig the distorted realms, reaching out beyond space and time!
Posted by Dead Dog at 11:36 AM No comments:

Email ThisBlogThis!Share to TwitterShare to FacebookShare to Pinterest
Newer Posts Older Posts Home
Subscribe to: Posts (Atom)
The curator of this blog also runs a small label, MAGIC MOTHER, specializing in small run vinyl and cassette releases.
Disclaimer: These albums are for promotional and preview purposes only. Please delete them within 24 hours. If you like an album support the artist and buy it!
IF YOU'RE AN ARTIST OR LABEL & DON'T WANT YOUR MUSIC HERE PLEASE LET US KNOW. LINKS WILL BE REMOVED IMMEDIATELY.