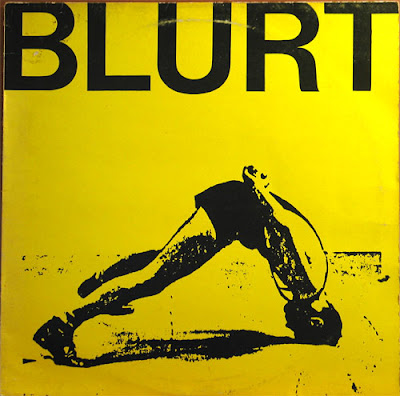 I have no album art for this one, sorry. If you've never heard Blurt, think James Chance meets The Pop Group meets The Birthday Party? Maybe even a bit of Faust-ish Krautrock thrown in for kicks? I know, i know, that sounds WAAAY too good to be true, and maybe it is. It probably is. Blurt isn't the best band to ever exist. BUT, they're certainly really really REALLY great and well worth listening to. So fucking groovy and cool. So get this and rock and roll a little. Its good time chir out duude. WAKKID DOOD. the end.

"Blurt are a musical group founded by poet, saxophonist and puppeteer Ted Milton in 1979 in Stroud, Gloucestershire. Ted Milton's brother Jake Milton, formerly in psychedelic group Quintessence, on drums and Peter Creese on guitar. After three albums Creese left the band to be replaced by Herman(Nep'n' Bend)Martin on synthesizers who after a year of constant touring left the band and was replaced by Steve Eagles, former member of Satans Rats, The Photos and Bang Bang Machine. Shortly thereafter brother Jake left to be replaced by Paul Wigens, with a short interim on drums by Nic Murcott. Eagles was replaced by Chris Vine as guitarist from 1990 to 1994. The latest drummer in the band is Bob Leith, also on drums in Cardiacs.

Blurt's compositions are based around repetitive minimalistic guitar and/or saxophone phrases with relentless, machine-like drum beats, over which Ted Milton orates his lyrics in a variety of "voices"."
- Wikipedia.com