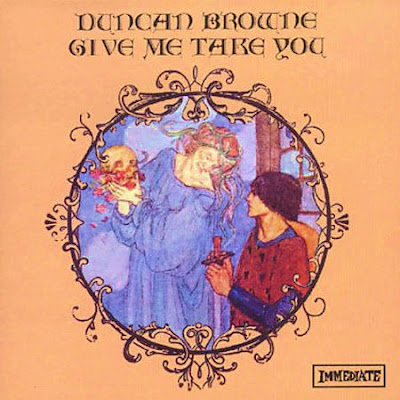 Some hippy psych-folk goodness for a quiet sunday afternoon. I was just listening to some Lee Hazelwood and it mellowed me out big time. I decided to listen to Duncan Browne's debut release Give Me Take You, an occassion not too frequent in my day to day. What a nice album. It's so peaceful and good. Browne's voice hangs slightly on a cross between Paul McCartney, Nick Drake and a bit of Dr. Strangely Strange frontman and founder Tim Booth. There's also a hint of John Cale in there somewhere. I highly recommend this to anyone who enjoys beautiful folk. Very similar musically to Donovan, Bill Fay, or Dr. Strangely Strange, though not quite as eccentric as the latter. Just get it if you like nice mellow acoustic guitar songs.
The End.

"Duncan Browne's melancholy first album, Give Me Take You -- released on music impresario Andrew Loog Oldham's Immediate label in 1968 -- is one wonderfully tender album. Many who only discovered it well after its original release are compare its dulcet introspective tone to Nick Drake's albums. It does fall into a similar English folk vein, though Browne's arrangements are, on the whole, more Baroque, giving the album a semi-classical, regal feel. Browne charted his own classical arrangements and wrote out vocal charts for a choir, but turned to his art school friend David Bretton for song lyrics. It's Bretton's lovely Pre-Raphaelite style phrases, used here in the guise of lyrical content, that fans of this album often react strongly to, one way or another. True, there's a youthful innocence and melancholy that comes off as somewhat naïve sounding, mawkish, and awkward in our modern age -- "Better a tear of truth than smiling lies" is one example -- but this is a minor quibble. Immediate issued only one single from the album, "On the Bombsite," but it failed to connect with listeners. At the time of its release, Oldham's Immediate was reportedly falling apart. He was in financial ruin and reportedly cut the sessions short to save money. The album remained out of print until 2000, when it was issued for the first time on compact disc by the U.K.-based Castle imprint, this time with five bonus tracks dating from Browne's early-'70s sessions when he was recording for the Bell label." - Allmusic.com


Ninepence Worth Of Walking

haha, you are quite welcome indeed.